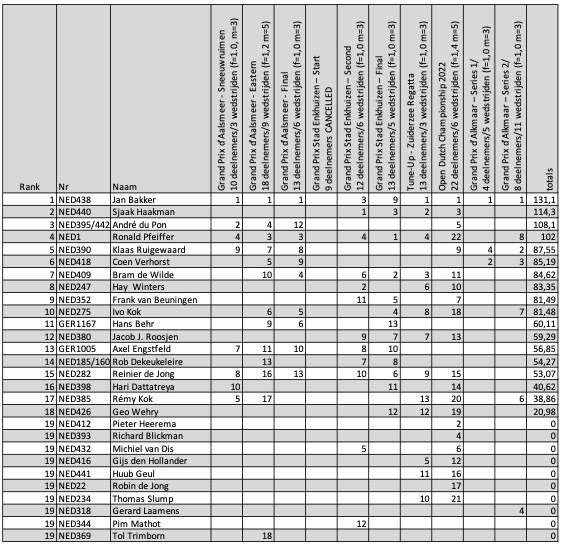 For the Year Prize all races of the Dutch Dragon Association Race Calendar sailed in the Netherlands are scored with the Ranking list principle. The member of the Dutch Dragon Association with the best score will be the winner. If two or more people have the same score the result during the Open Dutch Championship will decide who will win the year prize. If this is not decisive, the Year Prize will be awarded to the team members of the best Dutch Dragon Team of that year.

Each national race has a weight factor assigned to it in the range of 1.00 to 1.60, in 0.10 steps. The factor reflects the importance of the event, mainly the number and quality of competitors. The national factors are determined each year in advance. It is possible to raise a factor to promote a particular event. The factors for the international events are determined after the event has taken place and are among other parameters roughly bound to the number of participants (1-14: 1.00, 15-24: 1.20, 25-34: 1.30, 35-44: 1.40, >45: 1.50). The Dragon Gold Cup, European and World Championships have 1.60.

The basic formula for the calculation of the Ranking list score for one event is quite easy: Each participant receives a score which is given by 100 * ((number of participants + 1 - individual final position) / number of participants) * factor. If you assume a factor of 1.00 this means that the winner receives 100 points, the last competitor receives a score of 100/number_of_participants and the competitors in between are spread evenly corresponding to their final place. The scoring in the race does not matter, only the place is used.

The calculation so far does not account for the number of races sailed during an event. This is done by the so called "multiplier" m which determines how often the ranking list score for a particular event is counted. This multiplier is obtained by a lookup in the following table:

(*) So eventually discarded races are not counted

All the scores of an individual competitor are counted for the matching m-times; the best 9 are summed up and divided by 9 thus giving the overall score. If a competitor has less than 9 results he will not show up in the list, if he has more than 9 only the top 9 are counted, the rest is discarded.